Prowling around the American southwest, Mexico, and parts of South America at night; drinking and draining the blood of livestock and pets; and leaving a body count in your wake will earn you a reputation as the serial killer of the cryptid community, as well as the name Chupacabra, A.K.A. the goat sucker.

The first attack attributed to this ghastly beast occurred in Puerto Rico in 1995, but its territory has expanded rapidly since. It is described as four to five feet tall with a reptilian, dog-like appearance and known to emit a malodorous, sulfuric spray with an ear-piercing scream if cornered. Its eyes glow an unusual red color when under duress– that if seen directly causes nausea, vomiting, and sudden bowel evacuation (not making this up). Residents in an infested area should keep lights on and bring any pets indoors after nightfall – unless they want Fluffy turned into El Chupacabras juice box…or worse… 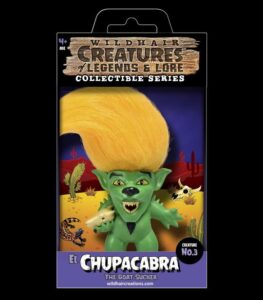