Sasquatch (arguably the most famous of all cryptids) is described by eyewitnesses as a towering ape-like beast, estimated by some as standing up to 12 feet tall and weighing in at nearly a ton. The creature’s most famous calling card is the 24-inch long footprints it leaves behind, which inspired the famous nickname: Bigfoot. It is also known for horrible, rancid breath.

Several eyewitness accounts, blurry photos, shaky videos, and cast footprints have been documented to corroborate Sasquatch’s existence and build upon the legend. Most recognizable is the 1967 Patterson-Gimlin film that shows what appears to be a Sasquatch walking through a forest and turning back briefly as a warning to the pursuing paparazzi. So convincing was this film that Skamania County in Washington State actually made the slaying of a Bigfoot a felony in 1969. Never confront Bigfoot alone…and always bring breath mints… 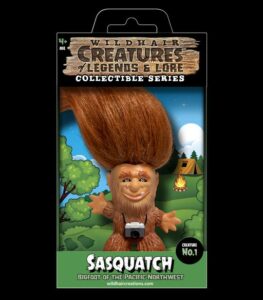